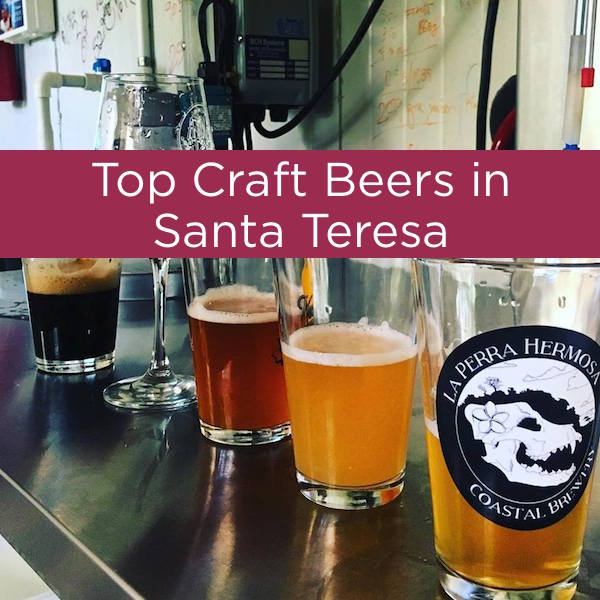 Top Craft Beer in Costa Rica: From Manzanillo to Montezuma

Traveling to remote parts of the globe seeking adventure or luxurious escape usually means giving up a few luxuries one might find at home. As the craft beer scene has seen a rise in the United States, Canada, the UK and across nations around the world craft beer and beer tours have become a staple for people looking to have a good time more so than ever. Costa Rica Beach Rentals wants you to know those days are over when you come to Santa Teresa. Craft beer has finally reached the remote tip of the Nicoya Peninsula in a big way and now visitors and residents alike can enjoy a selection of fresh, local, craft brews from Mal Pais to Playa Hermosa, round to Manzanillo and across to Montezuma and Cabuya. Being residents of the Santa Teresa area ourselves, us locals at Costa Rica Beach Rentals, definitely have opinions on the nice selection of local brews available in the area. See, we sourced a few of the favorites from our crew to share with you, in an effort to help you to be prepared to delight your pallet as soon as you’ve checked-in. Dining around Santa Teresa or out and about you may spot a local wearing a t-shirt representing our first selection. Incorporated in 2009 and a proud founding member of the Association of Craft Brewers in Costa Rica, La Perra Hermosa Coastal Brewery started in Playa Hermosa, moved to Mal Pais and rising in popularity, then finally settled in Delicias near Montezuma where it has since cemented itself as one of the most asked for beers in the area. Providing a full spectrum of cycling brews, their El Choro, Estrellada and Sueños flagships are followed up by an inspiring selection of over a dozen brews. Courtney and Ryan concentrate on using fresh seasonal ingredients to help incorporate the local wild tastes and smells of the area into their definitively coastal brews. Adding to the artisanal feel, signature silver cans with handwritten labels and/or stickers, can be found in various locations throughout Santa Teresa including Product C (on draft!!!) and Chop-It, Drift Bar as well as down the road at Chicken Joe’s and the local wine bar Tipsy. If you’re looking to get it straight from the source, head over to Delicias to their beautiful brewery where you can enjoy draft beers, tastings, and take home a case of La Perra Hermosa Coastal Brewery cans to enjoy back at your Costa Rica Beach Rental. While you’re on the Delicias side of the Southern Nicoya Peninsula pop over to our next selection as one of the top local brews in the area. Butterfly Brewing Co, located in Montezuma, is as established as any local brew in the area. Hailing from Portland, Oregon, Ryan Samuel has kept his brewing operation small but refined throughout his more than 6 years of brewing at his Mariposario Montezuma Garden’s Bed and Breakfast location. Heading up his lineup is an easy favorite in the Earthquake IPA and the smooth, refreshing Sunset Amber, followed by seasonal delights that are masterfully tuned to tickle your pallet in a robust way. You can try these brews at Cocolores and Organico if one finds themselves in Montezuma, but we recommend going direct to the brewery where you’ll be able to enjoy delicious cuisine at Clandestina and walk the amazing butterfly gardens with your brew in hand.

Last, but certainly not least, on our list is a brand that is in its relative infancy but one that holds a whole lot of brewing experience to its name. Que Mae Brewing in Manzanillo, just around the corner from the amazing Playa Hermosa, opened its doors to the public in 2017 and has been a town favorite since. It’s not hard to taste Trey’s nearly 26 years of experience in brewing when sampling a full taster of everything they have on tap. Honing his craft alongside Dunham Brewery in Quebec, Canada Trey has developed Que Mae’s flagship, Mantarraya IPA, Tierrosa NEIPA, and many more. For those who enjoy dark beers like porters and stouts, even in the heat, this is a quintessential stop for you as they often have at least two or three fantastically robust dark beers on hand. Recently expanding into Santa Teresa, Que Mae tasting room can be found next to the amazingly delicious Vermu Café, and they hint at big expansions in availability just around the corner. Look for these three breweries to really spread their wings in coming years. They’ve been around long enough now to have established themselves as the top tier in the area and their consistency has become the standard. This is a far cry from how the beer scene of Santa Teresa was in the past, but the word is out that from Mal Pais to Playa Hermosa, the magic is real and people are starting to flock here bringing their taste in good beer with them. Don’t worry about leaving your local favorites behind, there are plenty of amazing brews here to explore and you’ll have a chance to adventure the area at the same time! Costa Rica Beach Rentals wants you to enjoy your time here to the fullest, so let us know if you have any questions or how we can help you plan a visit to any of these three locations and more!