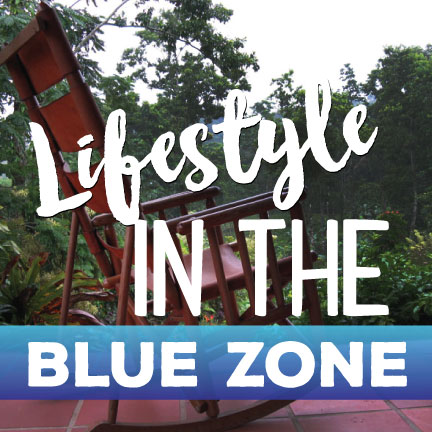 A major feature drawing visitors and investors to Santa Teresa is that it lies in the middle of a Blue Zone. There has been a lot of buzz in the press over the past few years about Blue Zones, a term that we now use to identify an area of the world where people live measurably longer lives. The concept was stumbled upon when Gianni Pes and Michel Poulain were doing longevity work on a small island of the coast of Italy. During their studies they noticed that this particular province had the highest concentration of men over the age of 100. The two decided to find other places around the world where people live particularly long lives. As they found these areas they marked them with a blue circle on a map and began referring to them as Blue Zones.

In 2004, National Geographic joined forces with Dan Buettner and a team of the worlds best longevity researchers to study these pockets around the world where people reached the age of 100 at 10 times a greater rate than those in the United States. After identifying five particular longevity hot spots, or Blue Zones, around the world in Okinawa (Japan), Sardinia (Italy), Nicoya (Costa Rica), Icaria (Greece), and among the Seventh-day Adventists in Loma Linda, California, the scientists along with National Geographic went to each Blue Zone to indentify characteristics that might bring light as to why people lived such long lives.

They eventually found 9 re-occurring lifestyle characteristics among the people in these zones that they began to refer to as the Power 9®. Dan Buettner later wrote about these in his book The Blue Zone which was featured on the New York Best Seller list. The book also landed Dan spots on Oprah, Ted and even Bill Clintons Health Initiative, making the term “Blue Zone” a household word. People over time began to associate Blue Zone with words like long-life, healthy and happy.

Working hard with a sense of purpose is also a common feature in the area as many of the locals still work in the fields as farmers and ranchers. This lifestyle also contributes to a healthy diet, high in legumes, fruits, and vegetables that all grow in abundance in the tropical climate.

Staying active and maintaining community traditions are also noticeable traits that contribute to the longevity and overall happiness of the locals on the Nicoya Peninsula. Each town or village is equipped with a church, soccer field and a park or community center. Early on the weekends, or in the afternoons as the day begins to cool off, the local men, women, and children take their place on the soccer fields engaging in pick-up games of futbol while the elders gather on their porches or in the parks and centers.

A sense of purpose, along with extended family and community, are much more important to the natives on the Southern Nicoya Peninsula then conveniences and possessions. In a world that moves at the pace of the latest gadget or invention, the people in Santa Teresa and surrounding communities have found a way to not only cherish, but to excel in the things that make life that much richer.

What were once blue circles on a map are now some of the most sought out destinations in the world for those interested in a blissful lifestyle. Along with breathtaking beaches, local cuisine and spectacular accommodations, Santa Teresa tops the list as one of most incredible spots on this planet because of its natural beauty and the quality of life for those in the area.