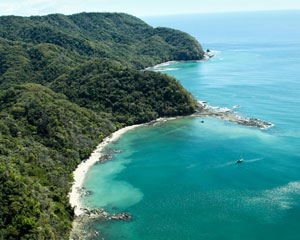 The Nicoya Peninsula is separated from the mainland of Costa Rica by the Gulf of Nicoya and the Tempisque estuary. From its northern base in the arid Guanacaste lowlands the peninsula extends 140 km to the south where the landscape progressively becomes more moist and hilly.

Tourism and expat living is concentrated along the coast while the interior is very sparsely populated. Cattle raising shapes much of the landscape with backdrops of the steep-sided and heavily forested inner mountain range. The countryside of the Peninsula de Nicoya goes overlooked by most travelers but those who stray from the beaten paths will find great options for eco-tourism.

The most noted feature of the Peninsula de Nicoya are the beaches. Within the vast expanse of coastline are innumerable magnificent beaches with dramatic coastal scenery, and small villages each with its own distinct charm.

Water sports such as surfing, fishing, snorkeling and diving define much of the character of the villages. Most areas have been discovered by surfers as the pacific side of Costa Rica presents one of the best stretches of surfing coastline in the world.